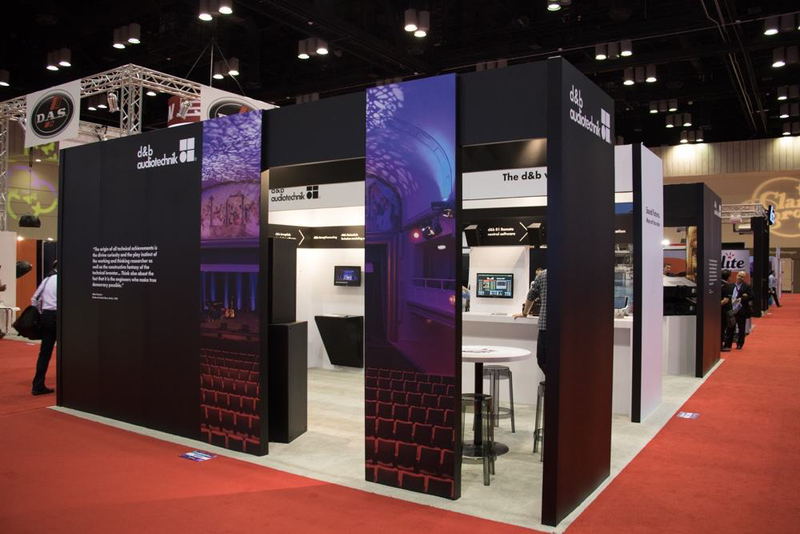 InfoComm may be over for another year, but memories of the Las Vegas show are lingering a little longer than usual for some. Visitors to the d&b audiotechnik booth and demo room are returning home with customisable solutions in mind and an entirely new perspective on the world of sound. This was the combined effect of the loudspeakers, electronics, software and service now available from d&b, making every audio vision possible, no matter how technically, aesthetically, or creatively complex.

At the booth integrators looking to preserve the look and feel of their venue were introduced to d&b Custom solutions, a newly launched service dedicated to the careful tailoring of rigging, colour and weather protection. The service formalises a long-held belief at d&b that a loudspeaker system can absorb sensitively into its surroundings, leaving listeners wholly unaware of its existence. Loudspeakers from the installation specific xC and xS-Series sat alongside the versatile Y-Series and award-winning V-Series, highlighting the neutral elegance of all d&b systems.

Meanwhile, the company’s new SL-Series, already regarded as a quantum leap for large-scale line arrays attracted much attention. Combining original techniques and approaches, these Special Loudspeakers realise the demand for the highest degree of dispersion control over the entire audio bandwidth, making the trade between size and wavelength a thing of the past. Made for super scale events the SL-Series comes in a carefully conceived package, to make unsurpassed performances easier to transport, rig and redeploy.

Elsewhere guests to the d&b demo room found themselves looking ahead to a new frontier in sound. First introduced at last year’s show, enthusiasm for the d&b Soundscape has been growing globally following recent outings at NAMM, AES, and ISE. Now one year on and the 2018 InfoComm demo room was full again with a crowd eager to know more. The session provided a technical lowdown on the DS100 Signal engine, the brain behind the beauty, and its two software modules En-Scene and En-Space.

“There is an energy surrounding the d&b Soundscape that’s creating a real buzz,” commented Larry Italia, President and CEO of d&b audiotechnik Americas. “And this is really what Soundscape is all about – seeing the potential and making a mental shift. And we’re all doing this together. More realistic source positioning is one thing, emulated acoustics is another, not to mention the creative scope for artistic work. People are excited by the possibilities and want to be part of the conversation – and that’s how revolutions start.”