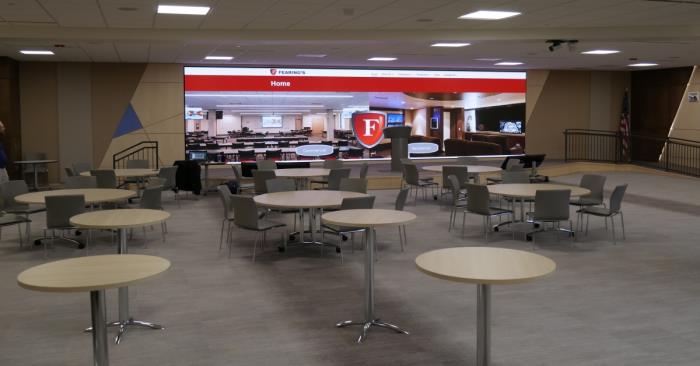 When a major regional energy company decided to remodel a section of its Wisconsin headquarters to create a new multi-purpose space, Fearing’s Audio Video Security got the call to design and install a sophisticated AV system. “The architects brought us in early on because they’re a partner of ours, and we do all kinds of rooms for them,” explains Fearing’s VP of Engineering Ehren Tresner. “The client tore down a bunch of walls, eliminating two conference rooms and other areas to open up a multifunction space that can be used for anything from large meetings to training, vendor events with booths, and so on.”

The space is not huge, with a capacity of approximately 200 to 250 people, and it does not have permanent seating. “But it’s an oddly-shaped room with three levels,” Tresner observes. “There’s a stage, a main floor, and a slightly raised rear floor. We originally had planned to use exposed modular line arrays, but the client started working with a partner to create a really cool wood façade that has angled panels and incorporates their logo into the design. So we went with two Renkus-Heinz ICONYX IC16-RN digitally steerable column arrays and hid them behind acoustically transparent panels on either side of the stage.”

Room acoustics are always an important consideration, but the new space is carpeted and has an acoustic tile ceiling, which helps. “Most of the walls have a wood finish, and it’s fairly reflective, but it’s not terrible,” opines Tresner. “We could add acoustic panels if there were issues but we haven’t needed them. With the ICONYX’ steerable beams, we can keep most of the sound off the walls. One concern was that we wanted to avoid using rear speakers, and the IC16-RNs let us do that, providing all the coverage we need. I also was concerned because we have mics onstage that are essentially in front of the speakers, but with the IC16-RNs, we had no problems with that either. It worked out great.”

Although he has used steerable arrays in the past, this was Tresner’s first project using ICONYX, and he did his homework before choosing them. “Listening to different column arrays, I was impressed with how the Renkus-Heinz ICONYX arrays sounded,” he reports. “That’s a big reason we ended up choosing the IC16-RNs.”

The Fearing’s team set the space up with ceiling mics and wireless mics, and the audio system is managed with a Biamp Tesira DSP. The new video system is impressive, as well, featuring a 31.5 by 9.5-foot LED video wall with multi-window capabilities. “It’s all video over IP, running on Cisco switches, with Cisco video conferencing, four cameras, confidence monitors-all kinds of fun stuff,” adds Tresner.

So far, the new space and its Renkus-Heinz loudspeakers have been a success. “The room sounds great,” Tresner confirms. “The Renkus-Heinz IC16-RNs exceeded our expectations for sound quality, and the coverage is excellent. We are very pleased.”

Megabox chooses Barco for its “full premium auditorium” in Korea