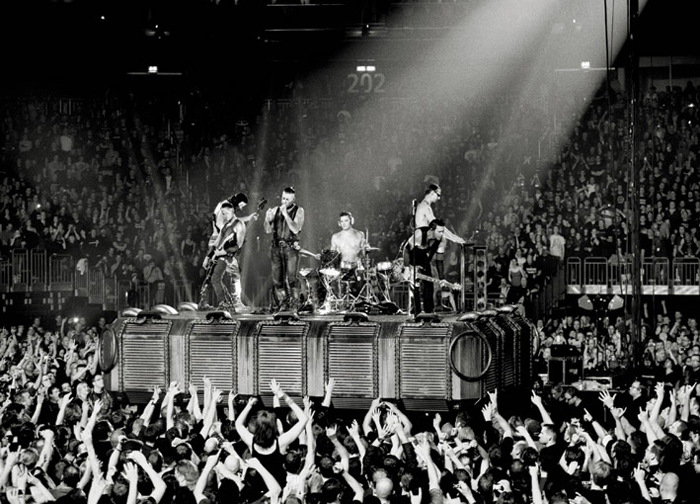 This was driven by a geared slew drive with a top rotation speed of 15 rpm.
The blades were lit by forty-eight integral Colorblast TRX LED fittings positioned around the inner cladding of the main fan.

Four smaller 0.75m fans with individual speed control provided by freelance electrician Lee Threlfell, were mounted at the corners of the Mega Fan’s frame assembly to blow smoke through from upstage.

Brilliant Stages manufactured the enormous aluminium construction, which measures 5.5 square metres and weighs over 1 750kg. This was suspended from four Cyberhoist motors, with two additional hoists employed to hinge the structure back into a horizontal position within the grid when not in use.

For the dynamic element, Brilliant Stages worked in association with Belgium based WiCreations who provided the hub motor, gearbox and control around which the fan is engineered.

They also fabricated the band’s signature logo cross into the drum riser door, which operated as a staggered-edged, cross-shape frame filled with cut tubes welded into position. These pulled apart to make an entrance for band members. Either side of the drum riser were two further 1m diameter, speed-controlled fans that were remounted into the new drum riser.

The B-stage was manufactured as a 5m by 3m platform, mounted on top of two manually operated hydraulic scissor lifts, raising it from a height of 1.2m to 3m above floor level. The platform was clad with aluminium slatted panels that mimic louvres, inset with an opal polycarbonate to allow back-lighting. Each panel was fitted with a framework to support the lighting and was up-lit through Neaco Nibar top decks set into the floors.

The B-stage was linked to the main stage via a 24m long, 1.2m wide catwalk composed of decking, handrail and ornamental balustrade.

The assembly included provision for mounting LED fluorescent tube lighting beneath the decking, accessible through removable top grills that remain clamped to the truss during transportation. The catwalk breaks down into three metre long bays, each composed of 3 grate panels for ease of handling.

The catwalk was flown in to a height of 3.3m above the audience’s head from a series of chain hoists and is designed to attach to the standard Rental Truss supplied by Black Box Music. Lifting bars were supplied to raise and lower the catwalk from rigging provided by head production rigger, Martin Gehring of DART GmbH, Germany.
Using a combination of coffin locks and Brilliant Stages’ own hook and channel system, all the set pieces were designed for quick and easily assembly, locking together safely with minimum fuss and maximum efficiency. Everything was transportation between venues in wheeled dollies to minimise the amount of manual handling needed.

The final scenic elements were clad in aluminium before being artworked and given a distressed finish by Perry Scenic another regular Brilliant Stages collaborator.

Rammstein is currently touring the US until the end of May. 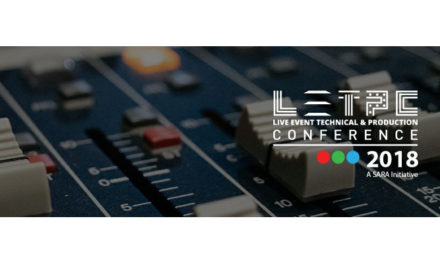 Live Event Technical and Production Conference to be held in Johannesburg